Make me smile by Cockney Rebel might not be a track normally associated with rock icons Def Leppard. Neither Bowie’s Suffragette City, T Rex classic 20th Century Boy or Winter Song by Lindisfarne! But front man Joe Elliott and bass player Rick Savage rocked the Sheffield City Hall with their amazing acoustic versions as a duet for one night only at the Sincerely Sheffield concert. They also gave the 2000 plus crowd Leppard hits Two Steps Behind, From the Inside and When Love and Hate Collide. The show - raising thousands for Sincere Support, teamed them up later with other South Yorkshire superstars. Rock legend John Parr performed St Elmo’s Fire live for the 1st time in ten years, Paul Carrack entertained at the piano with How Long, The Living Years. Dance diva Kelly Llorenna wowed the 2000 plus crowd with her new single This Time I Know its for Real and a sensational version of U2’s What I’m looking for and her massive hit Tell it to my heart. Eurovision girl Lindsay Dracass delivered power ballads Somewhere over the Rainbow, I can’t make you Love me and Stevie Wonder’s Overjoyed. Other stars included Boy on a Dolphin, Acoustic Angels and John Reilly who had the crowd in tears one minute and dancing in the aisles the next. After eight years Bev’s dream came true, a momentous occasion of which she is very proud. Follow the photo’s and enjoy some classic “for one night only” memories of what turned out to be an outstanding feast of musical talent. 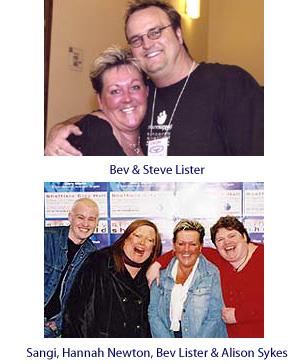