Philomena does some amazing work promoting drugs awareness all over the world and formed the “Roisin Dubh Trust” to assist this unending task of which we all know is the scourge of many of our lives.

On the weekend of the unveiling of the memorial statue of Phil Lynott we were privileged to be invited to the ceremony on the 19 th and Thin Lizzy gig the next day 20 th August. We were delighted to be a part of such a prestigious and emotional weekend which was attending by young and old alike from all over the world, England, Tokyo, Germany, USA to name a few.

It was a very emotional weekend for me in so many ways, not least in seeing a fellow bereaved parent reach her goal in bringing her son back to town in the form of a bronze statue. My heart felt for her as emotions ran so high, the way Philomena held this together was truly amazing. I would like to congratulate all involved especially Graham Cohen, Audrey O’Neill, Dawn McCarrick and not least the great lady herself Philomena.

The Roisín Dubh Trust .....
was set up to commemorate the artistic life of Philip Parris Lynott with dignity and style and to co-ordinate the various commemorative activities being undertaken in his name. As part of its objectives, the Roisín Dubh activities will include:

As the Trust grows, we intend to co-ordinate the various activities being held in Philip's honour in such a way that his memory will eventually be celebrated throughout the world.

The Roisín Dubh Trust was launched in Dublin, Ireland on 4th January 1994 with the stated objectives of commemorating the artistic life of the Thin Lizzy bass-guitarist and composer and co-ordinating the growing number of activities being organised in his honour.

The Committee will be happy to receive and consider proposals which would suitably honour the memory of the artist they call The Rocker, and will also be pleased to accept donations to cover running costs. All such proposals will be given ample exposure on this site. There are also long-term plans to inaugurate a Philip Lynott music scholarship

If you would like to support the work done in memory of Philip P. Lynott, your donation would be most welcome. 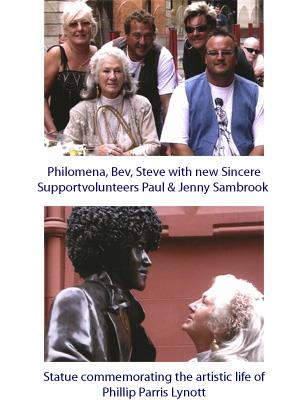